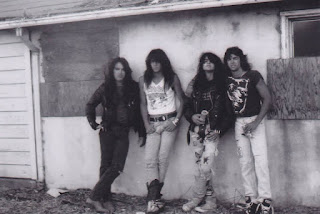 The above picture is of one of my former bands, Bad Weapons. I believe this is circa 1988. These photos were recently developed from negatives that were sitting in my drawer for over 25 years. Only last week did I lay eyes on them for the 1st time since they were taken (big thank you to Charlie, the bass player, 2nd from the right, for having these photos developed and sharing them).

When I 1st saw them, I was amazed and excited to see them. This was from a time when I was of an age where the future was to be seized and possibilities were supposedly limitless. I was a budding wannabe Rock star waiting for my turn at stardom and all the perks such a life was supposed to have (i.e. sex, drugs, etc). However, as I continued to look at them, a myriad of memories came rushing back to me, some very unpleasant and uncomfortable.

I won’t go into detail on the exact nature of some of the memories as they are personal and involve people that may not want to have such things drudged up. But I will say these photos were taken at the beginning of a period in my life that would devolve into a personal dark place that ultimately caused me to re-evaluate the direction of my life.

The dilapidated building we are leaning against was our band’s rehearsal studio. It was a former chicken-feed processing place outside Petaluma, CA. I wish I can say we spent all our hours there honing our Rock and Roll skills to a fine point. But, while we did spend a fair amount of time rehearsing, writing songs, and such, we spent far more of our time getting loaded. Eventually, and due in part to my own behavior, that place would double as my home for 1 year. While there are funny moments I recall from that time, such as putting together an outdoor shower with some 2x4’s, plastic tarp, and a garden hose, there are far more less-than-pleasant memories that I had not spent too much time thinking until I saw these pictures.

And that brings me to the point: Memories are powerful things. Coupled with a history, they evolve in perception as one becomes (hopefully) wiser and experienced. The memories these pictures evoke in the 2015 version of me are completely different than what they would have evoked had I saw these 10 years ago, 15 years ago….25 years ago.  The memories today are far more complex but, at the same time, meaningful. I see a more complete picture of who I was back then in the light of the man I’ve become. A big difference with these pictures compared to other pictures of my past is the specific pivotal point of my life in which these were taken. Whereas, if I see a baby picture or one from grade school, there is a recalled sense of innocence. With these pictures, not only has the innocence been lost, but there is a recollection of the misguided bravado of young adulthood mixed with a growing sense of dysfunction and loss. It’s hard to articulate but it’s a peculiar experience to see these photos again.

I will say that, having gone through the dark period that I was about to embark on at the time of these photos yielded several life-altering decisions and experiences. One, in particular, is worth sharing.

On December 7th, 1991, we were to rehearse at the “studio” pictured above for a very important show. On that particular night, Corey, our singer, decided to skip practice. This was not the 1st time this happened but, on that particular night, his absence infuriated me. Perhaps, my anger was fueled by growing difference between us that started the year prior when I made the decision to stop drinking/partying.  As is often the case, relationships that were based on mutual debauchery tend to become strained if one of the parties in the relationship decides to “clean up”. But, that said, I looked at our ongoing relationship as a musical necessity as well as I wanted to maintain a friendship. However, skipping practice that particular night was not going to go unchallenged.
So….I drove to the bar I suspected he was hanging out and…sure enough, there he was!!!!  As the bar was crowded, I wasn’t going to confront him there but I would wait him out. In the course of waiting, I came to meet a beautiful Filipina woman, albeit in an unusual way in that she almost burned my hair with a lit cigarette. Long story short….this was the 1st time I met the future Lilian Imberg, my wife. We (Corey, I, Lilian, and our drummer) ended up going back to our studio to do a half ass rehearsal. From there, Lilian and I spent the rest of the night talking (no hanky panky) and getting to know each other. In a nutshell, I met the love of my life.

All that said, I suppose the point of the rant is that these pictures represent so much more than just a promotional picture of a band I was once in. They are glimpses to the most pivotal 3 years of my life, where I experienced the pain and despair, but also some fun, and, ultimately, met the woman I would marry and create an amazing family with. 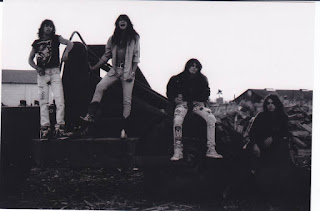 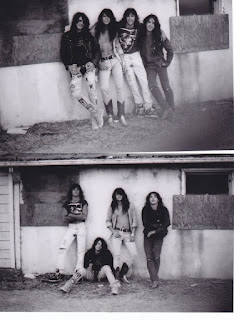