Lisa (a.k.a. The Red-Headed Step-Sister) 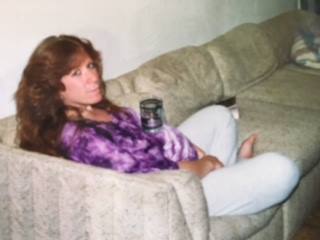 On May 1st, 2018, Lisa Lusk (my sister) passed away unexpectedly. She was only 53 years old. I always thought we would have more time...time to spend together...time to reconcile some unfinished business...time to continue to love each other...and that is the hard part about her being gone. There was so much I "left on the table". In the days between her death and her memorial, as I was out in California comforting my family, these words kept echoing through my head: "Tomorrow is but a hope, not a promise". So much truth in that statement. My words of advice to all: Leave nothing left unsaid. Make the phone call...take the phone call...make the visit...take nothing for granted.

What follows is a eulogy I composed on May 3rd and read aloud at her memorial.

A few times throughout my life, I’ve had to answer the question “Why do you and your sister look nothing alike”? Well, here’s the answer.

In 1977, I was 11 years old and an only child. It was two years removed from my mother’s death and months removed from the dissolution of my father’s 2nd marriage. It was an eventful period for a young boy and would get even more eventful before that year was complete as my father entered into yet another relationship, an unwelcome development from my perspective. The woman, Martha, would eventually become my 2nd stepmother. She had 3 children of her own: Michael, David, and Lisa. My future step-brothers were significantly older with Mike already off to college and Dave getting ready to go off to UCSB. Lisa, however, was only a year older than I and, like me, was none too pleased about the circumstances we were being forced into.

Our 1st meeting was awkward. I remember this “freckly red head” girl glaring at me like I was an unwelcome stranger and the feeling was mutual. We were put into situations where we had to get to know each other better but it felt like we were both doing so “kicking and screaming” on the inside. This period culminated, for me, with a concert my dad and future step-mom forced me to go to.

At this point in our lives, the only common ground we could find was “Star Wars”. But, at the time, we could not have been more different in our taste in music. While I was a hardcore Kiss fan. Lisa loved The Bee Gees, Donna Summer, and (worst of all) ANDY GIBB!!! Mr. Gibb was coming to town for a concert and she HAD to go. My dad and Martha got tickets but there was one problem: I had to go! I protested to no avail. They promised me that they would take me to see KISS (that never happened). So I went to this concert, sulking and glaring at Lisa the whole time. (We have since recounted this moment with much laughter...she even gave me a complete set of Kiss bobblehead dolls in 2014).
I would recover from Andy Gibb and a funny thing happened: We began to bond. It was a silent thing where I believe we both struggled with the changes that we were forced into and that gave us common ground from which a friendship would start.

Our relationship blossomed into full bloom in 1980 when we were forced into another “traumatic” change. Our parents moved us to Petaluma, disrupting our social lives as I was on the cusp of high school and she completing her freshman year. We were now having to start over in a new school with no friends. It was just us so we latched on to each other for support.

While I was a social introvert, she was becoming an attractive young woman and it was this development that gave me a social circle. She started dating Andy Neff. As this relationship developed, Lisa needed an accomplice to help her “sneak out” for dates. We would tell our parents that we were going to the movies but, in truth, ended up going to Andy’s house or hanging with his friends. This quickly developed into ¬our circle of friends. She became the epicenter of my social network. Our high school years was a mixture of great times and drama. But it was all experienced together. Our differences diminished as our common ground grew.

One fact that I only just realized the day I learned of her passing: As we hit our teens, our musical tastes became more common. Music has always been my passion as evident by my life time of guitar playing, music listening, etc. From that Andy Gibb concert on until 1986, we went to every concert together. And this was a large amount of events that were some of the most formative experiences of my life. Van Halen, Iron Maiden (3 times), Judas Priest (2 times), Y&T (13 times!!!), Scorpions (3 times), Rush (her favorite), Michael Schenker (the concert that inspired me to learn guitar), Journey, Sabbath, Ozzy….and on and on and on. All those shows, she was there with me. So many good times.
She was with me for every pivotal and formative moment of my life from 1977 through early adulthood. She was protective of me, especially when it came to my step-mom. While my relationship with my step-mom was challenging and, at times, adversarial, Lisa always “had my back”. She would defend me and encourage me. She truly was my “big sister” and my dearest friend. She was even there at my lowest moment when I had to spend my 1990 Christmas and New Years in jail. She dropped me off so I could start my sentence, being very concerned and encouraging as I walked through a nightmarish situation.

As we came into adulthood, our paths went in different directions with marriages, break ups, more marriages, children, etc. But through it all, she was always my sister.

As I write this, I’m sitting in her home with her husband. It’s the 3rd day since her passing and each one is getting harder as the realization that she’s gone sinks in. I’m heart broken. There is so much I left unsaid that I wish was spoken. I took for granted there was more time. The irony is not lost on me that, prior to 1977, I was quite happy to be an only child. But, a lifetime later, I’d give anything to have one more day with my older sister.
Posted by Alan Imberg at 4:43 PM No comments:

My blog has been getting neglected in favor of what little random social media blurps I produce...so here's some randomness on a variety of topics:

Posted by Alan Imberg at 3:55 PM No comments: