I have a love/hate relationship with the country of Brazil.

What I Hate:
Familiarity breeds contempt. Since 2006, I’ve been to Brazil 31 times, either to Santos, Sao Paulo, Rio de Janeiro, or Petropolis. The trips are usually long and take me away from my family. Thus, I’ve come to associate the sights and sounds of Brazil with the ache of missing my loved ones. And there are the crowds, the traffic, etc. And there are the constant rigors of travel. Airports, taxis, hotels, rude fellow travelers, etc. That is a fact of circumstance that is the nature of my travels.

On a positive note:
However, there is much to appreciate about Brazil, and not just the “touristy” aspects of it which I rarely get to partake in. (One qualifier: Though I've been to Brazil a lot, I know that by only seeing the aforementioned cities, there is so much of Brazil I've not been exposed to. I am by no means a Brazilian expert.)

What I love about Brazil:
Foremost, there is the warmth of the people as they welcome foreigners to their country. Not meaning to generalize but, far more often than not, I’ve encountered a subtle enthusiasm when meeting Brazilians for the 1st time. This has led to some cherished friendships over the years. I’ve been afforded remarkable hospitality.

As an example, in 2007, a gentleman I was working with, Jose Roberto, noted that I had Pink Floyd’s “Wish You Were Here” as a ring tone for my cell phone. He tells me that Roger Waters is playing in Rio and “if I would mind” going with him to the concert. My response: “WOULD I MIND?!!!! LET’S GO!!!” And it was one of the most memorable events of my life. Seeing Roger Waters for the 1st time….in Rio…playing classic Floyd stuff, including “Sheep” from Animals while 30,000 Brazilians sing along. Amazing!

I’ve also made some much cherished friendships. One friend in particular, Marcelo Barbosa (see picture below, taken Oct. 18th, 2015), I’m particularly fond of. We used to work together. Now, he’s moved on professionally. But that doesn’t stop him from making the effort to come visit me whenever I’m in the country. I always look forward to his warm welcomes.

Another aspect of Brazil that I’m fond of is the culture, or at least what little bit I’ve been exposed to. The music, the visual arts, the dance, all uniquely Brazilian. In some ways, Brazil has had a similar cultural evolution to the United States. Both have origins as European colonies. Both had slavery that was abolished. And the descendants of those slaves have greatly informed the culture. In the U.S., the descendants of slaves gave us the Blues, Jazz, and Rock and Roll. In Brazil, it’s Samba and……Brilliant music and dance that tends to sooth the soul.  And there is some top notch Brazilian Rock and Rollers as well. On one of my trips in 2012, I saw a group of teenagers playing in a park and did great renditions of songs by the Ramones and Iron Maiden.

As I write this, I’m sitting in a hotel lounge in Rio awaiting my flight back to the U.S. I’m very eager to leave and get home. But that doesn’t diminish the positive things I’ve become so familiar with. While I’m not eager for a return to Brazil anytime soon, I know that if/when I do return, I will have much to look forward to. 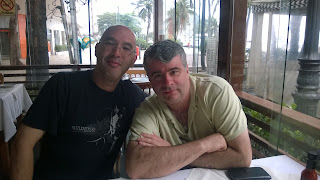 Posted by Alan Imberg at 6:51 AM No comments: