My late father would often repeat a quote attributed to Bette Davis: "Growing old ain't for sissies!"...except he wouldn't us the word "sissies" (he was a sailor. You can figure out what he really said).

Its a cute way to describe the aches and pains that come with aging. As I can now say, by any measure, that I have more "yesterday's" than "tomorrow's" left in me, I appreciate the truth in the statement. I don't think my Dad or Ms. Davis meant it as just some sort of declaration of courage and nobility in enduring physical decay. I think they also meant it did require strength to endure change: Loss of loved ones, evolving relationships, societal changes, and so on. As we age, we of course develop a personal history of events that lengthens each day we live. The older we get, the more change we will have inevitably experienced.

Different people deal with change differently. I have encountered people who accept change and welcome it as a means to learn and grow. More often than not, however, I've encountered people who, to varying degrees, feared change, responding with anger, and denial. Fear of change coupled with aging seems to make for angry old people.

I don't believe anyone is entirely fearless or fearful. People are dynamic creatures. But people do have dispositions, habits, and such. Chances are, if you were afraid of change in 20's or 30's, that would manifest in bitterness as life rolled on,,,,unless an epiphany or events intervened.

In this moment in my 54th year, I can gratefully say that I have experienced an epiphany or two. I've walked through some very fearful moments of loss, pain, and despair. I've also failed miserably to do so elegantly and gracefully. I have had to evolve in my thinking on many things, including politics, religion, even music. I've had to let go of long-held assumptions that have been proven wrong or no longer relevant. I've had to accept that some things I thought so important in my younger days weren't. I've learned that my perceptions of certain people and institutions were flawed and had to acknowledge as such. Above anything, I'm continuing to realize, with varying degrees of humility or humiliation, how little control I have in the flow of life. Yes, there are things I can control (my conduct) but there are so many things I must accept as beyond my control. This is why The Serenity Prayer is such a guide for me: 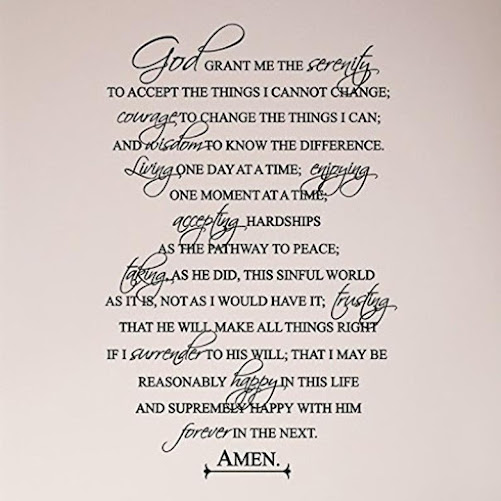 I, by no means, practice acceptance perfectly. But, as the beard grows grayer, it remains my daily aspiration to do better today than yesterday....with the grace of God and a courageous heart.