LAWRENCE FERLINGHETTI - The last of The Beats 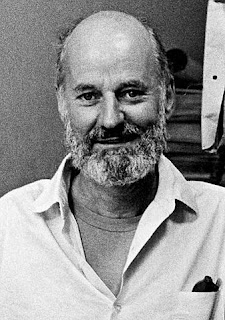 Growing up in the San Francisco area in the post-60's era, one was almost certainly exposed to the stories and lore of Haight Ashbury, The Grateful Dead, The Black Panthers, and The Beat Generation. Many of my generation would rebel against these "local icons" (if you will). I, for one, was suspicious of those who bragged about living through the 50's and 60's experiences and claiming that "their generation" changed the world. I, as an 80's kid, thought "whatever!".....however, as I grew older, I would be lured to learn more about those things of my local heritage and come to some level of appreciation.

The 1st "local icon" I would come to appreciate was The Beat Generation or The Beats. It was in mundane fashion, I suppose, where an artist of my generation, The Clash, collaborated with a key Beat figure, Allen Ginsberg  on the song "Ghetto Defendant" This collaboration validated, in my eyes, Allen Ginsberg, who I knew in name only, and gave me permission of sorts to explore Ginsberg's work.  This would be my gateway into a fascination and appreciation of his work and, by association, the entire Beat movement.

I won't go into the detail about my discovery and exploration of all things Beat. My point of this posting is to pay homage to the passing of the last core figure of The Beat movement, Lawrence Ferlinghetti, who died February 22, 2021 at the age of 101 years old.

Ferlinghetti was a poet, painter, fiction writer, and activist. But his greatest legacy (IMO) will be as a publisher and, through his publishing, a great free speech advocate. He was the publisher of Allen Ginsberg's "Howl" which would lead to the landmark "1957 Obscenity Trial". Below is a brief summary of the trial via Wikipedia:

Howl" contains many references to illicit drugs and sexual practices, both heterosexual and homosexual. Claiming that the book was obscene, customs officials seized 520 copies of the poem on 25 March 1957, being imported from England.

On June 3 Shig Murao, the bookstore manager, was arrested and jailed for selling Howl and Other Poems to an undercover San Francisco police officer. City Lights publisher Lawrence Ferlinghetti was subsequently arrested for publishing the book. At the obscenity trial, nine literary experts testified on the poem's behalf; Ferlinghetti, a published poet himself, is credited with breathing "publishing life" into Ginsberg's poetic career. Supported by the American Civil Liberties Union, Ferlinghetti won the case when California State Superior Court Judge Clayton Horn decided that the poem was of "redeeming social importance".

Its hard to imagine in this day how subversive an act it was to publish such a work in the social climate of the late 1950's. The outcome of this trial is one pivotal point that can be credited (or blamed as some do) for our current standards of what is permissible material in the public forum.

Through City Lights Bookstore which I frequently visited when I lived in The Bay Area (and still support via online), Ferlinghetti was the most tangible member of The Beats. I never met him but being able to walk into his store where so much history emanated from and look through the selection of books that reflected the owners worldview made Lawrence Ferlinghetti real, not a historical figure subjected to be hyperbolized and exaggerated.

With the passing of Lawrence Ferlinghetti, all of the key participants of The Beat movement are gone. Gary Snyder is still around but it can be said that he became involved with the movement in a tangential manner. Ferlinghetti was an architect of the movement. And now he is gone.

I'm very grateful to have overcome my initial bias against the aforementioned local icons.  In the case of The Beat Generation, I discovered a love of the works of those involved and that love has been shared with my eldest daughter who has gone through moments of obsession with the works of Ginsberg, Kerouac, and Lawrence Ferlinghetti (who did, indeed, change the world).